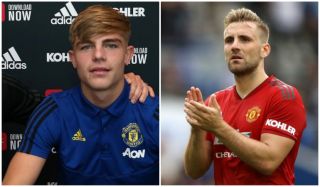 Brandon Williams has signed a new contract at Manchester United until 2022 with the option of a further year, as confirmed via ManUtd.com.

The young left-back has played twice this season impressing off the bench against Rochdale and on his first senior start against AZ Alkmaar.

Williams is pacy and skilful for a full-back and can play ion either flank. His main objective now should be to take Luke Shaw’s place in the team.

Footage emerged this week of Williams playing for England U20s against Czech Republic on Monday night, and it certainly left us feeling excited about his potential.

See below as Williams beats four Czech defenders for fun — similar to Real Madrid star Gareth Bale, who started his career at left-back with Southampton and Tottenham Hotspur — in a passage of play that leads to a goal-scoring opportunity.

There will be calls for Williams to start games soon if he continues to show form like that. He looks like a player who will keep us on the edge of our seats, which makes him an incredibly promising prospect for the Red Devils.

United fans have been reacting to the news of a new contract for Williams on Twitter:

Brandon Williams signs a new contract with #MUFC until 2022 with an option for an extra year! 🔴 pic.twitter.com/pr81nQkdnZ

Best United related news this week! We are sorted in the LB department for the next decade at least imo. Congrats to Brandon Williams for extending his contract with United 🙌🏽🙌🏽🙌🏽 https://t.co/hSuvbFgZB3

Best left back at the club

Great now use him. I’d much rather play the likes of him and Garner instead of square peg round hold situations like Young and well, most of our midfielders

Great now use him. I’d much rather play the likes of him and Garner instead of square peg round hold situations like Young and well, most of our midfielders

The end is near for Shaw!!

Great things to come as the Mancunian teenager extends his United contract until 2022 with an option for an extra year.🔴 pic.twitter.com/yF64IPcnG0