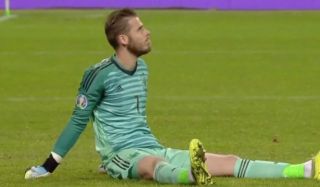 Couldn’t happen at a worse time!

David de Gea had to be substituted during Spain’s UEFA Euro 2020 qualifier against Sweden with an apparent injury on Tuesday, leaving the pitch on the hour mark.

However, Sergio Romero is more than capable. He has served United well down the years whenever called upon, and strangely enough could be considered Louis van Gaal’s best recruit at the club.

READ MORE: Allegri wants to include Man Utd fans’ favourite on his backroom staff if he replaces Solskjaer

De Gea had been attempting a clearance when he pulled up and needed to be replaced by Chelsea shot-stopper Kepa Arrizabalaga, as seen below (pictures from Sky Sports):

The United goalie has conceded a goal before coming off, in the 50th-minute, when Marcus Berg’s header hit the back of the net. But he made a stunning save to stop Robin Quaison scoring in the first-half:

David de Gea pulls off a stunning save to keep out Robin Quaison’s header.

United are up against a strong Liverpool side who have enjoyed a perfect start to the new Premier League season — eight wins out of eight thus far — and they will smell blood knowing De Gea is likely to be out. MEN reporter Samuel Luckhurst notes that De Gea has not missed a game against LFC since September 2012 when Anders Lindegaard started ahead of him at Anfield.

David de Gea forced off with an injury in Spain’s Euro qualifier in Sweden. Has not missed an #mufc game against Liverpool since September 2012 when Lindegaard started ahead of him at Anfield.

Whoever is in goal on Sunday will need a strong performance from the United defence to help stop United’s impressive attacking line led by Sadio Mane and Mohamed Salah. They’ve scored nine goals between them in the league already and will be ready to pounce any given moment.

Harry Maguire, the world’s most expensive defender, needs to be at his best vs the Scousers.

See below for Twitter reactions from United fans on De Gea’s injury.

Of course it’s our key player that get injured all the time.

I have a feeling that David De Gea will be starting for #mufc between the sticks come Sunday.

I’d back him against anything & anyone. pic.twitter.com/BvzBz9P9BB

I am more than comfortable for Romero to come in. Great deputy and rarely puts in a bad performance pic.twitter.com/wUKtOcrgMT

Not to worry, Romero solid as a rock 😉

Blow for #MUFC that De Gea has come off injured for Spain. Luckily Romero is a good backup option, usually serves United well.