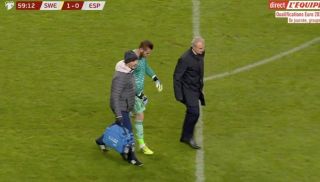 Ole Gunnar Solskjaer is having no luck at the moment.

Manchester United have been dealt a huge blow ahead of their clash against Liverpool this weekend, after goalkeeper David de Gea picked up an injury during Spain’s 1-1 draw with Sweden.

De Gea was forced off with an injury on the hour mark and there are now doubts over whether he’ll be fit for the big game on Sunday.

That puts second choice keeper Sergio Romero in contention to play. The Argentine has always served United well and is more than capable of standing in to face the Scousers (this news isn’t our biggest concern ahead of the fixture with weaknesses throughout the team).

After kicking the ball up the pitch, the Spanish keeper was floored with pain and immediately replaced by Chelsea shot-stopper Kepa.

Liverpool have been dealt much better goalkeeper news with No.1 Allison returning to training in time for the game.