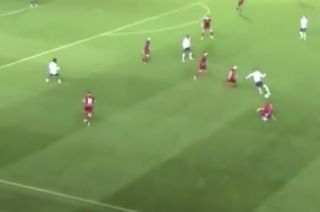 What a goal it would have been but sadly the finishing at the end was woeful.

The left-back channeled his inner Gareth Bale in England’s defeat against the Czech Republic of Monday night.

He gets the ball on the left wing from fellow United ace Angel Gomes before cutting into the middle of the pitch.

Brandon effortlessly glides past a defender with terrific footwork and uses his quick feet to get past another. Unfortunately his shot was deflected but the fall fell to West Brom starlet Jonathan Leko and the forward sent his volley wide.

Take a look at William’s impressive run below, as well as some reactions from Twitter:

Just saw some flashes of a prime Marcelo in him. He is promising ✌✌

He has to be United’s LB

We found the new Evra 🔥

Been saying it for months, he’s much better than shaw.