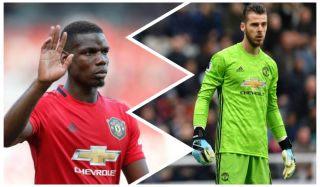 Manchester United duo Paul Pogba and David de Gea have been ruled out of the Premier League clash with Liverpool this weekend.

To say it’s been far from an ideal season for United would be an understatement, and matters have got worse with key players set to be missing as we face our fiercest of rivals.

The Red Devils have started the season poorly and currently sit in 12th just two points above the relegation zone.

Ole Gunnar Solskjaer’s men have already lost to Crystal Palace, West Ham and Newcastle this season, and we shouldn’t forget the terrible performances against Southampton and League One outfit Rochdale.

The Norwegian is now under serious pressure with Italian coach Massimiliano Allegri linked with the United job, as per the Daily Mail. It’s been reported that a deal is ‘very close’.

But things are getting worse again for Ole — with Pogba and De Gea both ruled out of the game this weekend.

De Gea picked up an injury during the international break as Spain drew 1-1 with Sweden.

Ole has confirmed that De Gea will miss the game, saying, “I think he’ll be out,” as per Sky Sports.

“It certainly looked like it anyway judging on last night so it’s just one of those things.”

Meanwhile, Pogba will also miss out. He has “no chance” of being ready.