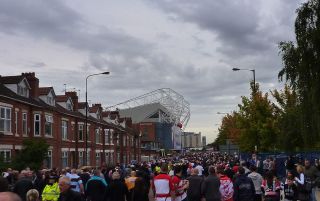 Six years on since the departure of Sir Alex Ferguson and you probably couldn’t conjure up a set of anxiety ridden circumstances, even in your wildest nightmares.

The noisy neighbours champions on multiple occasions, Scousers European champions and knocking on the door of the title itself and United, hovering above the relegation zone with the same money hungry owners and a stadium leakier than our back four.

Nobody has a divine right to success but fans have every right to be concerned about the downward trajectory and the lack of entertainment on the pitch. If we were losing but scoring goals and showing signs of improvement,  then perhaps patience would be justified, but frankly things have become so poor it is understandable why anger is fuelling simmering discontent.

There are fundamental problems at the heart of the organisation and major surgery is required to remove the malignancy. The problem is that the patient simply isn’t listening. There is no mechanism to remove the Glazers and Woodward, and there is no collective will for fans to take real affirmative action. The resolve of the modern fan seems to starts and ends as taps on a keyboard or a smartphone screen.

The truth is that the current regime is here to stay for the foreseeable future, so what does that mean for the short to medium term fortunes of the biggest club in the country? In short, it doesn’t look good. There would need to be a massive reversal of fortunes on a comparable scale to the honeymoon period that followed Ole’s caretaker appointment. With the run of bad injuries and underwhelming performances the prospects for such a radical turn-around look slim.

Clearly the positives have revolved around the summer signings and the successful return from loan of Axel Tuanzebe. Recent seasons have been blighted by poor defending and there certainly look to be signs of a firmer foundation to protect the recently re-signed De Gea. Options in the winter transfer window look limited to perhaps an experienced forward to mitigate the spate of injuries. Beyond that you have got to think that there are probably at least three key signings required before United can challenge for the top four. Two of those signings need to be in the midfield, to add some gravitas and flare to a team devoid of confidence and options. The failure of Jesse Lingard to progress is a concern that now requires action to address.

In terms of the rest of the season, amid talk of yet another driver at the wheel, maybe the best option for United will be a path to the Champions League via the Europa route. It will be still be a difficult challenge, the paucity of goals will prove to be United’s achilles heal in this competition too unless Rashford and Martial can find a rapid return to form. Still, we should not under estimate the opportunity that the Europa League offers to give the team a foothold from which we hope and pray, better things can follow.