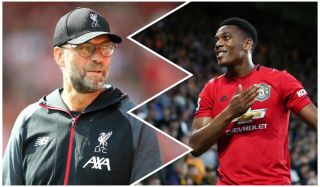 If ever there’s a good time to face this Liverpool side under Jurgen Klopp then it’s now.

That may sound odd given the fact that they arrive at Old Trafford for the 203rd installment of the English game’s most storied rivalry with history on the line. But it’s a free hit with the world and his wife expecting nothing but a win for the Reds from Merseyside.

We’ve nothing to lose. A United win would do wonders for the confidence, morale and Ole Gunnar Solskjaer’s state of mind.

But without further ado, here is how we think United will line up in the game like no other on Sunday, in a 4-2-3-1 system.

David de Gea’s hamstring adds to the ever lengthening injury list, but the absence of the Spaniard is not as big a blow for United as it once might have been. De Gea limped off during his country’s draw with Sweden on Tuesday and is a doubt for the game. That means that Sergio Romero is set to get the nod. The Argentine never lets United down when called upon and is undoubtedly the best back up in the league. For a man who’s played in a World Cup final and was an ever-present in United’s Europa League win a few years back, a meeting with the Scousers is unlikely to faze him. As number two keepers go, there are very few better.

AWB has missed the last three games through illness but his return couldn’t have been timed better. He has been hugely impressive so far but is set to face his biggest challenge in the Red of United so far. He will tasked with the job of shackling Sadio Mane – something that his contemporaries Matteo Darmian and Ashley Young have managed to do successfully in recent seasons. Although it’s not yet confirmed whether he will feature for sure, Wan-Bissaka is in line to come straight back in.

This is a game in which the world’s two most expensive defenders line up in direct opposition, with the Slabhead’s all-action style in stark contrast to the ice cool composure of his £75m opposite number in Virgil van Dijk. Maguire has been solid if unspectacular so far, with United’s defensive efforts the main positive of this season so far. He was brought in for games such as this and starts at the heart of our defence. A no brainer

This is the one position that’s hard to call. Victor Lindelof has done little wrong but he has a weakness against the high ball and Liverpool love to get crosses in. For me, that make the Iceman’s inclusion a significant risk against a team that will go all out attack. I was very impressed by Tuanzebe against Arsenal and the fact he captained the side against Rochdale was a show of faith by Ole. He was the one positive in defeat to Newcastle and deserves to keep his place for this one.

I would personally go with Diogo Dalot, but this predicted XI is what we think Solskjaer will go with, so on that basis Young is in. This game looks to have too soon for Luke Shaw, who has returned to training, so Young will likely continue at left-back. When Shaw is fit, Young is no longer first choice but he can do a job as cover and to be fair hasn’t made too many errors when called upon. Don’t expect him to get forward much, as he’ll have his hands full dealing with the most potent front three in Europe.

Player of the Month McTominay scored United’s Goal of the Month and has been an ever-present for us so far this season – a figure of calmness and authority in stormy times at Old Trafford. I would have him in my United side ahead of the likes of Fred and Nemanja Matic every day of the week. A United captain in the making. McTominay continues to come of age and is one of the few this season to have enhanced his burgeoning reputation.

Speaking of Matic, the traffic cone will play in this one with Paul Pogba’s cracked toe making him a major doubt for this blue riband fixture. It is a straight pick between the Serbian and Fred, which is a bit like choosing between Theresa May and Boris Johnson as your PM. Or choosing between two blokes to take your missus. He missed the clash with Newcastle and probably shouldn’t have faced Arsenal. The fact that United were willing to risk a player who divides opinion, but a player who’s our creator-in-chief, says it all. I wouldn’t play Matic, but there’s no one else and I think Solskjaer will put him in to try and nullify the energy and guile of Gini Wijnaldum, James Milner and company.

After a blistering start to life at Old Trafford, James has started to look like the Championship player of last season. Mind you, he’s certainly not alone there. He took a nasty blow to the head on international duty for Wales in their tie with Croatia, but should be fine to line up here. With Anthony Martial expected to return, James may revert to his favoured position out wide having played in a more central position we have seen him take up in recent weeks.

I don’t get Andreas Pereira. He seems all hype and I don’t think he’s up to it. That said, he has a good set piece delivery on him and that will be key in this game.Our productivity from corners and free-kicks is one of the worst in the league, but that’s one area where we can hurt Liverpool if we get it right. For that reason, I think Pereira gets the nod. He has started in all but one league game for United so far this season and I expect that to continue on Sunday.

Rashford grabbed himself a much needed goal in England’s rout of Bulgaria on Monday. That game also showed that he’s better cutting in from wide rather than starting through the middle as an out-and-out striker. That’s where he should play against Liverpool. Although he could have done with a rest, it was a goal that will hopefully bring his confidence flooding back. Rashford is in need of a big performance for United having been starved of service and struggled this season.

United are hopeful Martial will be fit to start for the first time since he suffered a thigh injury in the 2-1 defeat to Crystal Palace on August 24. Martial scored two in three starts in August and could return to the centre forward role against the club whom he made a goalscoring debut against. The fitful Frenchman’s return to the line up will come as a huge lift to United’s depleted ranks.

Verdict: It pains me to admit it, but Liverpool are miles ahead of United, and indeed of everyone bar City. I can’t see anything other than a win for the men from down the East Lancs Road at Old Trafford, but I also think it will be closer than many have predicted. Avoiding a thrashing is probably the best we can hope for.