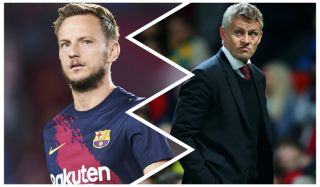 We’re in the middle of October and speculation over the January transfer window is heating up — and signings are desperately needed at Old Trafford.

The biggest problem Manchester United face is that it’s notoriously difficult to buy in the mid-season. Football clubs aren’t going to sell their best players during a season, but Ole Gunnar Solskjaer will need to do all he can if he’s to save his job.

One player who has regularly been linked with a move to United is Barcelona midfielder Ivan Rakitic. However, that story now seems to be dead in the water.

ESPN claims the 31-year-old midfield ace is ‘available’ though a move to Old Trafford is unlikely due to ‘family reasons’.

Nobody knows what the precise personal issues are, but perhaps Rakitic has no interest in coming to the Premier League before he retires? And if he did, would he or his wife have a preference over London?

Moreover, United fans must come to the realisation that we have lost quite a bit of our pull factor since the Sir Alex Ferguson era. It is Solskjaer’s job to make the team appealing again.

ESPN adds that players like John McGinn, Moussa Dembele, James Maddison, Declan Rice and Callum Wilson are all seen as potential targets — but you feel we’ll be made wait until next summer for any of those.