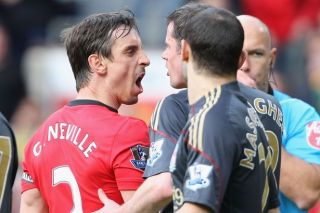 Despite our form this season, I can’t help but feel excited about this fixture.

It will more than likely end in tears for Manchester United, who currently sit in 12th and just two points above the relegation zone, while Liverpool are coasting on top of the Premier League after a perfect start to the season.

Sky Sports don’t necessarily need to build this up but they will anyway, and with the help of Gary Neville and Jamie Carragher they’re going big with a promo video on the biggest fixture in English football.

People will probably start to take issue with us calling it that, the biggest fixture in English football, but that didn’t change when Liverpool were sh*te. It doesn’t change now.

We’ve done our predicted XI for the game as well as a Q&A with Liverpool blogger Jordan Chamberlain. All that’s left is the game itself. 90 minutes of stomach aches — well, depending on when you start getting those pains, it could be the night before!

Anyhow, sit back and enjoy the promo video by Sky Sports, as seen below: