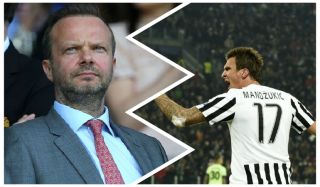 Ed Woodward wants Mario Mandzukic to drop his contract demands and join Manchester United in the January transfer window, as per reports.

United have scored just nine goals in eight games this season and need goals to turn their awful form around.

To put that into some context, this weekend’s opponents Liverpool have a forward line led by Sadio Mane and Mohamed Salah, who both have nine goals (as many as United) between them.

United have supposedly identified 33-year-old striker Mandzukic as a target ahead of the January transfer window.

The Croatian is not starting as many games for Juventus nowadays and may be keen on a switch to the Premier League, but his earnings at the Serie A club (£85,000-a-week) may prove to be a stumbling block.

According to ESPN via the Daily Mirror, Woodward is not prepared to overpay on players just to save United’s season, even though we are sure he’s aware that the current squad isn’t good enough to compete with the best teams in England anymore.

It has been said that Woodward considers Mandzukic’s wages to be too steep, yet he is happy to pay Phil Jones more than the said amount? That’s what we call bobbins!