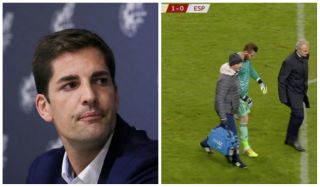 David de Gea felt in the first-half of Spain’s Euro 2020 qualifier against Sweden but decided to play on.

Knowing Manchester United host Liverpool at the weekend that wasn’t a very wise idea, though that’s easier said in hindsight since he had to be substituted on the hour mark.

“David made a great save in the first half and it is wonderful [to] have three great goalkeepers,” Spain boss Robert Moreno said after the game, as quoted by The Express.

“He suffers pain in his abductor muscle but he received treatment at the half-time and he wanted to keep playing.

“He gave us his word but at the end, he couldn’t continue.”

The Spanish coaches took him off after the United stopped pulled up after taking a goal kick and appeared to be having severe discomfort in his right leg (pictures from Sky Sports):

He signalled to the bench and was replaced by Chelsea keeper Kept Arrizabalaga.

Sergio Romero is now expected to start against Liverpool on Sunday.