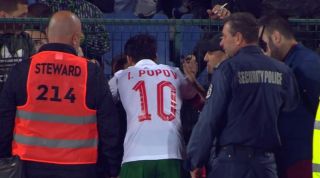 Marcus Rashford has praised Bulgaria captain Ivelin Popov after his attempts at half-time to stop the racist abuse coming from the stands.

Gareth Southgate’s men secured a 6-0 win in Sofia on Monday night, but that hasn’t took over the headlines in this morning’s newspapers. The entire game was overshadowed by the disgusting racist chants and facist salutes coming from a small section of home supporters.

The game was stopped twice in the first half and UEFA protocol was followed, with the encounter at risk of being abandoned if the abuse continued.

Although it lessened after the interval it didn’t stop completely and the game really should have been abandoned. Now UEFA must do something to ensure these bigots never get into a game again.

As noted by BBC Sport, Popov was seen at half-time in a ‘heated debate’ with some fans as the consensus was that he was trying to persuade them to stop the abuse.

Rashford appreciated Popov’s effort and tweeted his praise after the match, as seen below:

Also been told what the Bulgaria captain did at half-time. To stand alone and do the right thing takes courage and acts like that shouldn’t go unnoticed. #NoToRacism