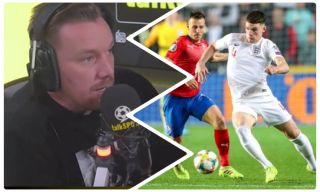 Jamie O’Hara was speaking about England international Declan Rice on TalkSPORT this week.

The former Tottenham Hotspur midfielder made it known that he thinks the West Ham star is ‘overrated’ but you get the impression he doesn’t think Rice should be starting for England.

O’Hara warns that Rice is not a £100m player and, like a number of young England players under Southgate, is guilty of being overhyped.

“I would have to say he’s a little bit overrated,” said O’Hara.

Manchester United have been linked with a move for Rice, as per The Express, with Solskjaer trying to find a method to strengthen his midfield after doing so with his defence.

Watch the short clip below as O’Hara talks Rice, via talkSPORT’s YouTube channel:

Speaking about his future, Rice was recently quoted by The Metro: “I signed a five year contract with West Ham last year, which will keep me at the club till I’m 24, and for me this is the best place to be right now.

“I am playing for a manager who has given me my chance and played me week in, week out.

“It’s all talk until something happens — and nothing has — so I’m just focused on West Ham, doing may best and making fans happy.”