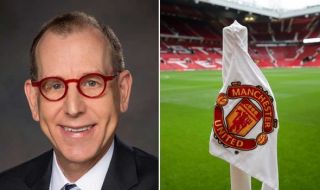 Kevin Glazer is reportedly set to sell his 13% stake in Manchester United, becoming the first of his siblings to do so since their father Malcolm Glazer bought the club in a debt-ridden takeover in 2005.

The club, however, was left to Malcolm’s offspring when he died in May 2014.

United are going through challenging times on the pitch at the moment, and it doesn’t help that the Glazer family only see the football club as a commercial cash cow.

The sooner they’re all gone the better.

According to The Sun, Kevin Glazer is now set to cash in on his stake at United, which coincides with their first fall in revenue in years and their search for a new shirt sponsor because Chevrolet look unlikely to extend their deal with the club.

Less Glazer involvement is a good thing for United, so hopefully this is true and they all take the hint to go!

The Sun also claim that the Glazers refused to sell United to the Saudi Arabian government last year.