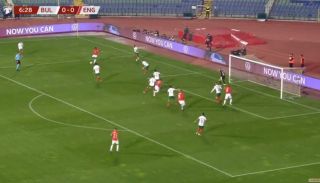 Marcus Rashford showed great ability to give England the lead in their Euro 2020 qualifier against Bulgaria tonight.

Gareth Southgate’s side took the lead thanks to a fine solo effort from the United star.

After picking up the ball on the left wing, where Rashford started for the Three Lions, he beats two players with ease before cutting in on his right and striking the ball into the top right-hand corner.

This will hopefully act as a confidence booster for Rashford. He’s not been great lately and looks to be struggling with the responsibly of leading the line for Ole Gunnar Solskjaer’s side.

Many have argued that Rashford would be better suited on the left and we might see him take up that role on Sunday when the Scousers come to town.

It all depends on Anthony Martial returning to the team as well, as Solskjaer hasn’t got many options up front currently.

Watch the goal below (Pictures via ITV Football):

Rashford cuts back on the left and bends one into the far corner. Wonderful strike

So Rashford can score belters like this for England and turn into Emile Heskey with United all of a sudden? pic.twitter.com/Zkgqop2AWx