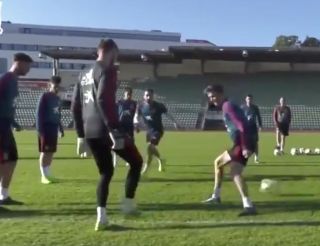 Skills to pay the bills.

David de Gea is amazing with his feet. When it comes to preventing goals but also when it requires fooling his team-mates.

The Manchester United goalkeeper is away with Spain on international duty and has been keen to show off his ability win the ball.

But it’s usually goalkeepers who get nutmegged, not the goalkeepers doing the nutmegging!

As seen in the video below, De Gea pulled off two nutmegs during a training session and he appeared to have enjoyed it.

On his day, De Gea is the best goalkeeper in the world and manager Ole Gunnar Solskjaer will hope his new contract allows him to focus on his performances again.