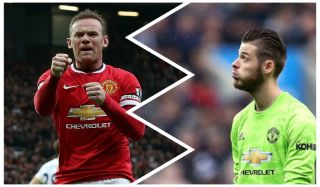 It’s the international break and we’re all looking for engaging content to keep football fans sane and away from the boredom that usually takes over during these off-periods.

The Daily Mirror has published a list of ‘the 50 greatest Premier League players of the decade: 2010-2019’.

For the most part, it makes for difficult reading for United fans considering Manchester City dominate the top 50, with Argentina international Sergio Aguero seen as the greatest.

But a look back at the past decade and you can’t say we’ve much to complain about looking at the rankings. Our last title came in 2013, the end of Sir Alex Ferguson and United’s domination of English football.

Hopefully we find our way back to that level one day.

The list itself is based on longevity, meaning those who have been in the league the longest do well, with success the other major barometer.

Michael Carrick is named at number 40, behind Juan Mata, who never won the Premier League despite previously playing for Chelsea.

Coming in at 36 is Alexis Sanchez, for his time at Arsenal. OBVIOUSLY!

Two players that linked up superbly at United are next up, with Wayne Rooney (19th) and Robin van Persie (18th).

David de Gea is 5th, the highest-placed player to have played for United the past decade, and there can be no arguments over that. No keeper comes close (Petr Cech 17th).