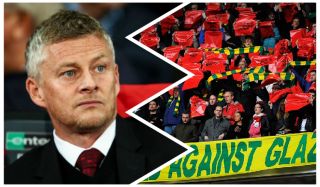 We spoke to Empire of The Kop Editor and Liverpool fan Jordan Chamberlain today about Sunday’s clash between Manchester United vs Liverpool.

SN asked him about Liverpool’s recent success under Jurgen Klopp, his thoughts on United and the game this weekend.

Of course, we don’t expect sympathy from Liverpool fans when it comes to the current struggles at Old Trafford. Jordan is honest and passionate about his football club, you’ve got to respect that.

Even if you disagree with his comments on the Glazer family!

Sit back and grab yourself a brew. This makes for good reading and please check out my responses to EOTK’s questions here.

Hi Jordan, describe in one paragraph then job Klopp has done at Liverpool thus far and (*sigh) how you are now looking like the frontrunners of English football again.

It’s pretty incredible. We were a side in desperate need of an overhaul and a fanbase that had grown bitter and mistrusting. Klopp promised to turn us from ‘doubters into believers’ and a few months ago, over a million Reds turned out on the streets of Liverpool to welcome him and his team of world-beaters back from their Champions League triumph. Almost every player in the side is a candidate for ‘Best on the planet’ in his position. It’s not bad, is it?

When you see the state of Manchester United today with terrible owners, does Hicks & Gillett come to mind?

Having grown up watching United win everything, I don’t feel too much sympathy. The club is too big to stay bad forever and it’s good you’re experiencing a period of rubbish – it makes the good times feel so much better.

And while the Glazers are bad, they’re not quite Hicks and Gillett. You still spend loads of money on top players and the club isn’t going to fold under their ownership!

It might happen that we’ll sack a club legend as manager in the coming weeks or months. When Kenny Dalglish was sacked in 2012, how did it feel as a fan?

A bit weird? But Kenny was there to give us a quick fix after Roy Hodgson’s shambolic tenure – he was never a long-term appointment. He did well. He steadied us. It was probably the right decision.

Talking about Dalglish’s sacking, would that put you off appointing Steven Gerrard in the future?

If he proves himself to be a good enough manager, then bring it on. We shouldn’t be giving him the job on the back of his playing days though. Having said that, he looks like he’s proper management material. So in a very long time, when Jurgen Klopp needs a well-earned break – why not? I think Pep Lijnders will get the job, though.

Liverpool didn’t spend much in the summer and it could be argued that, after winning the Champions League, you didn’t need to. But do you think that will come back to bite you in the arse if Man City can mount a title race?

Klopp wants a tightly knit squad. He wants players who can fulfil multiple positions if someone is injured. He’d struggle to keep 22 world-class players (two for every position) happy – and Liverpool don’t want to spend the wages this requires anyway. Liverpool have racked up 101 points from the past 38 Premier League games. It’s basically unprecedented. Whatever happens, I don’t really see how Klopp can be criticised. He’s got us to where we are – a position where we’re competing with the best team the Premier League has ever seen, with the biggest budget in world football. Let’s enjoy the ride.

What XI will Klopp pick for the United game — and what tactic?

The team picks itself, really. Adrian and Lovren will start if Ali and Matip aren’t ready.

And finally… what do you see happening Sunday — give us a scoreline!

United are going to be really, really up for this. The crowd will be brilliant – and the first 20 minutes will be frantic. But I’ve never seen a tactically worse United side and Solksjaer isn’t in Klopp’s league. If we can’t win this one at Old Trafford, we never will! 2-1.