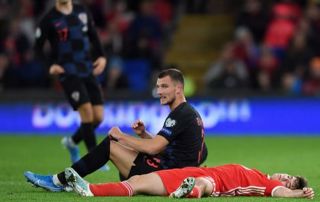 There’s a constant conversation going on in sport about how we can help prevent head injuries and how to deal with them once they occur. Many are of the view that football is miles behind when it comes to diagnosing concussions.

Petr Cech and Ryan Mason are obvious examples that show the seriousness of head injuries, but there was a nasty incident that involved a United player last night whilst on international duty.

Welsh winger Daniel James looked like he was knocked out after a clash of heads when playing against World Cup finalists Croatia.

It looked serious at the time but he took to the field again shortly after. Mason wasn’t particularly pleased about it:

Daniel James was just knocked out unconscious! Yet 3 minutes later he has been allowed back onto the pitch 🤷‍♂️

Wales and United will need to be careful with James, as evidence shows that concussions can develop after the event even if he feels okay now…

James gave an interview to Sky Sports which the Manchester Evening News has reported on.

He tried to play down any fears that he faces time out following the knock, saying: “He caught me in the head. I didn’t get knocked out.”

How does he stay on the pitch after this? Red card all day long. https://t.co/MpA8sivwQx

We’ll take James’ word for it but he looked unconscious as he lay on the ground.

Ryan Giggs then claimed James was ‘acting’, speaking the media after the game (via Daily Mail): “Daniel James went down and stayed down with a bit of acting.

“But the medical staff went over, he was compos mentis and we did all the checks at half-time and he was fine.”

Time will tell if he plays any part in United’s game this weekend versus Liverpool.