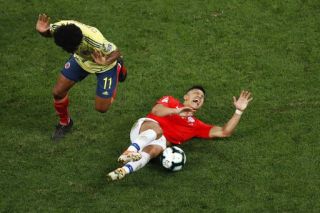 Alexis Sanchez faces a spell out after picking up an ankle injury on International duty.

The Chile international — on loan at Inter Milan from Manchester United — was forced off in the second half of their 0-0 friendly draw with Colombia.

This comes as a blow to United as it does Inter and Sanchez. The Red Devils were hoping he’d kick on in Italy to persuade clubs to bid for him in the transfer market.

According to the Chilean Football Federation, the 30-year-old has “dislocated tendons” in his left ankle and has returned to Milan for further assessment, as per BBC Sport.

Sanchez scored on his first start for the Serie A club against Sampdoria, and also featured in their Champions League defeat versus his former club Barcelona.

This injury should keep Sanchez out until the new year, which doesn’t bode well for his chances to impress, and United could have hassle trying to find him a new club next summer.

Ole Gunnar Solskjaer didn’t shut the door on Sanchez when he took over last season. He gave the former Arsenal star chances to make a name for himself at Old Trafford but Sanchez failed to deliver.