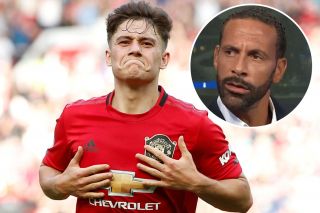 The Welsh winger left Championship outfit Swansea City for Old Trafford in the summer and has scored three goals in his first four appearances for United.

James has impressed with his pace and his direct style of play, causing havoc for defenders who he will chase if they’re lucky enough to take the ball from him.

The 21-year-old signed for United in the summer along with defensive duo Aaron Wan-Bissaka and Harry Maguire.

He has been a rare highlight in a season that has seen United struggle so far, with Ole Gunnar Solskjaer’s side sat 12 and just two points off the relegation zone.

Former United defender Ferdinand has heaped praise on James after being left impressed by his performances to date.

“I don’t think they [United] expected what they got from Daniel James so early on in his Manchester United career,” Ferdinand told talkSPORT.

“He’s probably been their most influential player so far, so what does that really say about that squad?

“You’re buying someone from Swansea who was probably brought in as someone who is going to flourish at a later date.

“However, he’s been forced to the forefront as their main man in the team at the moment. That really says where Manchester United are at this minute in time.”

After selling Romelu Lukaku and allowing Alexis Sanchez leave for Inter on loan, Solskjaer has had limited options in attack this season which has allowed James to take his opportunity.

But injuries to Marcus Rashford and Anthony Martial has severely limited the team’s goal threat.