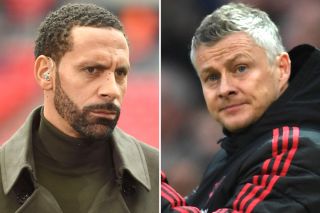 Rio Ferdinand says he’d be shocked if Manchester United parted ways with Ole Gunnar Solskjaer even after a horror start to the season.

The former defender doesn’t believe United are naive enough to think Solskjaer could turn the club around overnight.

As the saying goes, Rome wasn’t built in one day.

But to get that backing Solskjaer needs to start showing more as a manager of the current crop. We might agree that most of the players aren’t very good — not meeting the required standard of United players — but the Norwegian coach is not getting the best out of them.

United have made their worst start to a season in 30 years and are just two points away from the relegation zone in 12th place. It’s a far cry from the teams that Solskjaer and Ferdinand played in, but the former England international wants to see his former team-mate given time.

“There’s no way the club would have thought this would be rosy straight away, they’re not naive enough to think it was going to be a situation where he just changes it overnight,” Ferdinand told talkSPORT, as quoted by Goal.com.

“This is definitely something where there is gong to be early pain, there is going to be a situation where the results are not going to go our way, especially with the new recruitment that they’ve started to go with younger players.

“That’s why I don’t see there being a change straight away, I’d be very surprised if I wake up, open a paper or an app and see that he has gone so quickly.”

United take on Liverpool at Old Trafford after the international break and it’s difficult to see where the results are going to come from if we keep struggling in front of goal.

We can only hope that Anthony Martial returns to full fitness soon.