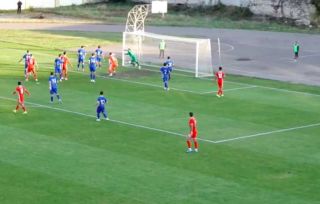 The 18-year-old midfielder’s corner was met by Nathan Broadhead who headed in to give Wales the lead over Moldova.

It was poor defending in truth by the opposition, but Levitt picked out his man perfectly with a driven technique.

Levitt is showing huge signs of promise in United’s development sides and his talents have already been recognised by Wales first-team manager Ryan Giggs.

The midfielder has yet to make his debut under Giggs but was called up to the squad for games against Croatia and Hungary in June.

Levitt was also drafted in to replace Aaron Ramsey for the recent games against Azerbaijan and Belarus.

He will be hoping to continue making an impression for United’s u23 side under Neil Wood this season and perhaps make his way into Ole Gunnar Solskjaer’s first-team plans with the Norwegian light in midfield options.

See the youngster’s assist below: