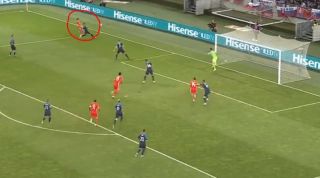 Daniel James was in action last night as Wales drew with Slovakia.

The Manchester United winger does superbly to turn his defender before getting in a cross for team-mate Kieffer Moore, who makes no mistake with his headed finish.

It’s all about the quality from James though, and he’s shown it a few times this season for United.

Nobody expected the 21-year-old, coming from the Championship, to hit the ground running at Old Trafford. Although results haven’t been going the team’s way there’s a slight relief when you see new signings doing well from the beginning.

United fans will enjoy the clip below as James continues to contribute goals for club and country.