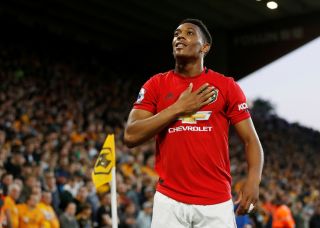 Juan Mata has backed teammate Anthony Martial for a “really big” future at Manchester United, as the club await the Frenchman’s return from injury.

Martial hasn’t featured for United since our 2-1 defeat to Crystal Palace at Old Trafford in August.

Ole Gunnar Solskjaer’s side have struggled for goals in his absence.

The Red Devils have scored just six goals in nine games across all competitions since Martial sustained that thigh injury.

Marcus Rashford has played the central role in Martial’s absence and it’s clear we need the France international back as soon as possible. Speaking to Sky Sports, Mata was asked about the impact he expects from the 23-year-old in the coming years:

“Well I hope it’s really big,” the attacking midfielder said when asked how big Martial’s future could be.

“He’s an incredibly talented player. You can see him since the moment he arrived at the club, [scoring] in his first game against Liverpool.

“But in every training [session] the way he treats the ball, the way he takes on people, the way he can win a game by himself. Like I say in the book, I love these kind of players with such a big talent and I love to play with them.

“He’s an incredible player, he’s still young and hopefully he’s got a big career ahead of him.”

Trust Mata to get a bit of self-promotion in there! (Book available from all good book stores etc)

Jokes side, Mata is right but the past two years I don’t feel Martial has developed quite as much as he should have. He still hasn’t scored 20+ goals in one season, although only now is he really being considered for the central role in United’s attack.

Martial has primarily been used as a left forward at United.