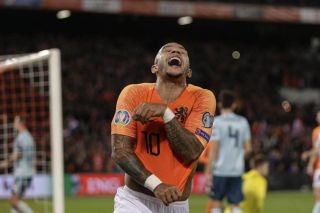 First, let’s be clear. A good showing against Northern Ireland should not warrant calls for Manchester United to re-sign Memphis Depay.

But several United fans still took to Twitter last night to urge the club to bring back the Dutch winger following his two goals in Holland’s 3-1 win.

The Netherlands overcame Northern Ireland yesterday despite going a goal behind in the 75th minute, with Depay turning the game on its head with a late brace.

Since moving to Lyon from Old Trafford in 2017, the former PSV star has recored 45 goals and 42 assists in 126 games, which is an incredible return for a player who looked below bar in a United shirt — scoring just seven goals and racking up six assists in 53 games for the club…

And, it seems like some United fans have decided they want him back at Old Trafford.

Check out the tweets on Depay below:

United ! Go after Memphis Depay, bring him back to Old Trafford #MUFC #Manchester

Haven’t #mufc got a buy back clause on Depay? 🤔

Can we get Memphis Depay back? Or am I just getting desperate now…#MUFC

is it too late to get Daley Blind and Memphis depay back at united? better than our current options

Can Man United buy back Memphis Depay are naw???

I think it’s time for Man United to buy back Memphis Depay. Dude has been on fire of late 🔥🔥🔥 #NERNIR

United need to buy depay back!

Shout out to Memphis Depay. Please come back to United ❤️😉