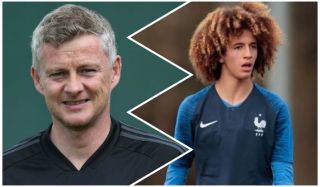 A recent report suggests Manchester United are excited about the prospect of academy midfielder Hannibal Mejbri.

According to The Times, which requires a subscription, United are trying to be more proactive with their recruitment of promising youngsters after missing out on Bayern Munich star Thiago Alcantara some years ago.

It is suggested that insiders at the club are very excited about 16-year-old Mejbri, who joined from AS Monaco in the summer.

As per The Times report, the Red Devils are trying to restore their famed philosophy that has been lost since the days of Sir Alex Ferguson.

Presumably the club are rushing back to their old ways of prioritising youth development because every emerging star in the game is going for mega money in the transfer market. This works out cheaper and will put the club in a stronger position if implement properly.

Solskjaer has taken the aspect of youth on board; promising youngsters it’s not about their age, it’s about being good enough. Mason Greenwood, Brandon Williams, Angel Gomes, Tahith Chong and James Garner have all been in or around the first-team this season.