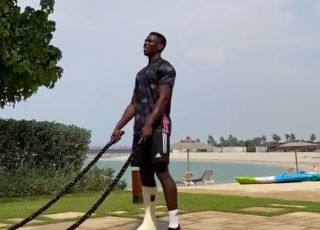 Manchester United midfielder Paul Pogba has provided fans with a fresh fitness update as he targets a return for the highly-anticipated clash against Liverpool next Sunday.

The Frenchman has had a stop-start beginning to his season, and has missed recent fixtures against AZ Alkmaar and Newcastle.

As reported by the he Daily Mail, Pogba has been suffering with a cracked toe but has not required surgery on the issue and is recovering ‘naturally’.

Pogba’s absence from Ole Gunnar Solskjaer’s side has been extremely detrimental with United seemingly not having a creative outlet on the field when the 26-year-old doesn’t feature.

Despite not operating in an attacking midfield role this season, Pogba has still looked most likely to break down an opposition defence with his vision and distribution.

His fitness will be crucial to a United’s chance of getting a result against league leaders, who will fancy their chances of coming to Old Trafford and winning comfortably.

Solskjaer’s side are currently low on confidence and the midfielder’s return would provide a welcome boost ahead of the test against Jurgen Klopp’s side.

See Pogba’s fitness update below, where he reveals he is ‘almost there’ in his recovery.

Ig Pogba: "Almost there 💦 show off or motivation 🤔 you choose ? Same result at the end anyway 🤷🏾‍♂️🙏🏾#enjoyworking" [paulpogba] pic.twitter.com/worDt6jv4b