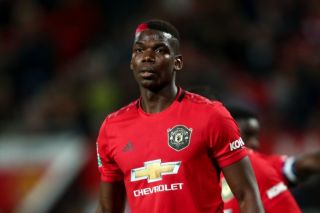 Paul Pogba remains a doubt for Manchester United’s clash with Liverpool after the international break.

The French midfielder has reportedly been suffering with a ‘cracked toe’ in recent weeks, and has missed United’s latest games against AZ Alkmaar and Newcastle.

As per the Daily Mail, Pogba picked up a knock in United’s Carabao Cup shootout victory over Rochdale, and a scan revealed a ‘microfisure’ in his foot.

Ole Gunnar Solskjaer started Pogba in the 1-1 draw against Arsenal despite the French international not being fully fit, which aggravated the problem.

According to French publication L’Equipe, as sourced by the Mail, Pogba will not require surgery on the injury and United prefer the more ‘natural route to recovery’.

Pogba’s absence from Solskjaer’s side has been notable, with United not having a creative outlet when the 26-year-old does not feature.

His fitness will be crucial to United’s chances of competing with Premier League leaders Liverpool at Old Trafford on October 20th, but he faces a race against time with an expected two to three weeks recovery time.

Jurgen Klopp’s side are already 15 points ahead of United and the game will be a huge test of Solskjaer’s credentials.

Pogba has been working on his fitness in a warm weather training trip to Dubai, and will return to Carrington to continue his recovery.