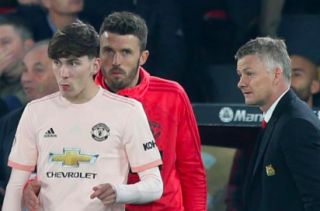 The young midfielder scored England’s u19 side’s only goal in their 3-1 defeat against France in Marbella, Spain. Garner captained Keith Downing’s side and scored from the penalty spot.

The 18-year-old made his first appearance for the Reds under Solskjaer last season in an away victory over Crystal Palace, but has yet to feature so far this season.

We took a look at why Solskjaer should starting giving Garner more first-team opportunities after the international break.

Garner has scored six goals in just seven appearances so far this season for United’s u21 and u23 sides. The youngster has a knack of scoring and is brilliant at shooting from outside the box.

Despite operating in a central midfield role, Garner is a constant goal threat when venturing forward. Given the worrying lack of goals in Solskjaer’s side at the moment, surely there would be no harm in seeing if the academy star can contribute to the first-team side?

The midfield is an obvious key area of weakness for Solskjaer. The Norwegian has had just Scott McTominay, Fred and Nemanja Matic to select in recent weeks with Paul Pogba out injured. Many fans had called for Fred to get more game time after some encouraging substitute performances, but the Brazilian was atrocious in games against AZ Alkmaar and Newcastle.

Whilst Matic is often too slow at releasing the ball to attackers, Fred is wasteful and struggles to complete the simplest of passes  to one of his teammates.

Garner could provide some much needed fresh impetus into the midfield and could not do much worse than the options Solskjaer has to choose from at the moment. United clearly need to address the issue in January by bringing in at least one new signing, but for now Garner should be given the opportunity to show Solskjaer what he can do.

Garner has watched his fellow academy graduates Angel Gomes, Tahith Chong, Brandon Williams and Mason Greenwood step up and get first-team chances so far this season.

He has arguably been the best player across United’s development sides this season and has earned a first-team call-up with his impressive performances in midfield.

The Reds have games in the Carabao Cup and the Europa League after the break which should give Solskjaer the chance to at least give Garner some appearances from the bench.