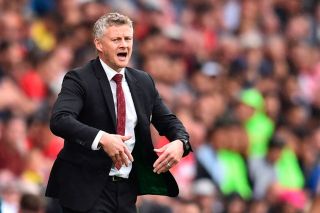 Most Manchester United fans have gone against the grain and relished the upcoming international break, the principle reason being that it was impossible to witness our United side ruin our weekends for a change.

It should never come to that, should it? Whilst the two week break might come as a relief to some, for many it has led to plenty of discussion time and wondering how it has turned into a disaster following the 4-0 victory over Chelsea bred so much optimism.

It almost beggars belief United found the net on four separate occasions: As it stands, Solskjaer has presided over United’s worst start for thirty years, the team look totally devoid of confidence and inclination to attack and we sit precariously just two points above the drop zone. You cannot even label this United side with the old adage ‘too good to go down’, because frankly this side is NOT GOOD period! It that wasn’t desperate enough, the worst possible league leaders head to Old Trafford next and could deliver the ultimate knockout.

There are claims and counter claims throughout the media one minute to the next that Ole is safe, then Ole is doomed. The truth is, only the clowns at boardroom level know how close or not close Ole is to receiving his P45. Although you could be forgiven for believing the Yanks are totally oblivious to the on field slide, given United continue to flourish off the field as a cash cow juggernaut. We all know the real elephant in the room is Ed Woodward and he might as well contribute to the fall of a club legend, to add to managerial heavyweights Van Gaal and Mourinho.

Unfortunately for Ole, he looks like David Moyes’ little brother currently- devoid of life, a Plan B and out of his depth. Many would now accept that he was incredibly fortunate to get the gig in the first place, benefitting from Woodward seeing vastly more pound signs after he pulled off the heist in Paris, going against the initial promise of seeing out the season, which ended very much as this has begun. Many would also argue that with a CV containing Molde and relegating Cardiff City, this was a job not fit for someone of Solskjaer’s credentials, with his chief asset being his knowledge of the club and ex-player status.

So you might question this next sentence… I am not in the Ole out brigade… yet!

Manchester United cannot simply afford to keep giving managers a quarter of a billion to spend to then cast them aside without allowing them to see through the project they have started. Credit deserves to be given where due, and Solskjaer’s recruitment policy, so far, has bore very successful fruits. Harry Maguire has been steady if not spectacular, Aaron Wan-Bissaka looks a hell of a full back and Daniel James has surpassed all expectations. There is an identity there, a clear ethos, and if Ed Woodward has the slightest modicum of decency and grace behind him, he should give Solskjaer the opportunity, league position depending, to work through his list of targets and give the squad the winter bolstering it so desperately is craving.

The amount of injuries has clearly been unsustainable too, we have not seen the XI fielded against Chelsea again since for one reason or another, the main one being injuries. Perhaps that is down to the training methods, less likely just rotten luck but it is something that needs rectifying ASAP.

As much as they polarise opinion, purely in the popularity stakes, there can be little doubting that United gravely miss the French duo Anthony Martial and Paul Pogba, particularly when Pogba is missing the creativity levels barely eclipse zero.

As such, United have been left woefully short of quality options and has led to the likes of Andreas Pereira and Fred, who has now taken the long held mantle from Kleberson as United’s worst ever midfielder, leapfrogging their way into the starting eleven, when even their places as Manchester United players rightfully have been brought into question.

Any elite side would struggle with that much upheaval, let alone a youthful, transitional team. That aside, the players need to get a dose of reality, understand the gravity of the situation and roll up their sleeves and fight for the badge, the suffering supporters paying well earned cash and their suffering manager, because Liverpool want to put the final nail in the coffin and will not be standing on ceremony.

You have to think that once players start returning, results will pick up, let’s not forget we were a spot kick away from topping the league after a tough start, on paper, of Chelsea at home and Wolves away, so it’s clear there is potential within this squad.

In any case, say the worst were to happen- United continue to slump down the table and results do not turn, which managers with pedigree are A) available and B) would be willing to come to United with the current structure and on field predicament? Big Sam is ruled out because that was only funny once.

Mauricio Pochettino is the obvious name, and arguably should have been headhunted last summer, but given he is in charge of a freefalling Tottenham team which has probably reached its ceiling with no trophies to show, for all the attacking intent and offensive qualities, does he have the credentials?

While Max Allegri can boast a superior trophy haul, his style of play can often be labelled functional and hardly free flowing. The Italian Mourinho, no?

Some outside runners now include Red Bull Leipzig’s Julian Nagelsmann and even Leicester’s Brendan Rodgers, well if those aren’t as bandwagon as they come I don’t know who is?

Arsene Wenger is reticent to take another English job after his long associations with Arsenal and I suppose then all the other elite European names are tied to clubs in healthier positions and a semblance of stability.

After all that, I think we can all agree that there is no outstanding candidate banging the door down saying, ‘I am the next Manchester United manager and will take you back to the top’. That in itself should not be the reason to keep Ole Gunnar Solskjaer, because there is no one else out there, it’s more he will have the fan support (as heard in the stands in Newcastle with more and more Glazer chants ringing out), he has demonstrated he has an eye in the transfer market and it is clear the way he is trying to revive United philosophy wise.

Of course, there will be a time when results become increasingly untenable and then a decision will have to be made. If that does happen, that will inevitably be another name gone by the way side on Ed Woodward’s watch, yet he remains immune from any criticism and his job is not under threat because we all know what the Glazers’ priorities are.

Solskjaer’s problem is that he needs to get results fast, as much as the majority of the relegation talk is from opposing revellers and in gest, the current scenario is nowhere near good enough for one of the world’s richest clubs.

If United can get through to January having got an upturn in results, the picture will be a lot rosier, but that seems a huge ‘if’ as things stand.

So I am Ole at the wheel, but I suppose the key is… for now.