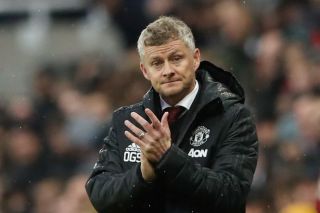 Statistically, United’s defence is the best in the league, which hardly reflects the atrocious start to the season with United currently sitting in 12th position.

The Reds conceded 54 goals last time out, but would only concede 38 goals this season with projections after the opening eight matches.

Solskjaer considerably strengthened in defence this summer with the arrivals of Harry Maguire and Aaron Wan-Bissaka, two of the most highly regarded British defenders.

Ole Gunnar Solskjaer has transformed #mufc's defence within one summer — per 38 games:

Statistically, the best defence in the league. pic.twitter.com/ydfGlhDTJ4

Despite the awful results in recent weeks, the defence has hardly been the brunt of the problem for Solskjaer.

Victor Lindelof and Maguire have formed somewhat of an encouraging central defensive partnership, with Axel Tuanzebe knocking on the door to take the Swedish international’s place.

Wan-Bissaka has also looked solid in the right-back when he has played, but missed the matches against Arsenal, AZ Alkmaar and Newcastle with tonsillitis.

The only criticism of Wan-Bissaka so far among fans is the lack of an attacking outlet he has offered Solskjaer’s men.

And it’s the attacking areas where United are struggling so desperately. A steady defence should provide a platform to attack from but instead United look void of ideas and hopeless going forward.

It’s hard to find an identity in United’s style of play at the moment; Solskjaer’s side often drift through matches without any real plan of attack or way of threatening their opposition.

It’s true that the United boss has been left threadbare in attacking options, but one goal scored in games against Arsenal, AZ Alkmaar and Newcastle is simply not good enough regardless of the limited numbers he can select from.

Solskjaer has to be credited for identifying a key area of weakness last season and signing two key players at right-back and centre-back.

There is a base to work from for the United boss but a way of breaking opposition defences somehow has to be found before the club inevitably look to bolster their striking and creative options in the January transfer window.