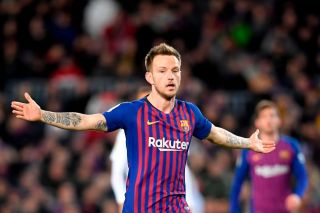 Croatia international Ivan Rakitic has put a host of European clubs including Manchester United on red alert after revealing that he may seek an early exit from Camp Nou if his playing time at Barcelona does not improve.

Since joining Barcelona from Sevilla in 2014, the midfield maestro has been a source of class, control and creativity.

Rakitic may be kicking on a bit at 31, which doesn’t exactly fit United’s newfound transfer profile under Ole Gunnar Solskjaer, but the team needs to drastically improve in midfield.

The main reason for Rakitic wanting out of Barça is game time. Manager Ernesto Valverde has this season given the Croatian just 156 minutes on the pitch.

He was then left out of the squad to face his former club Sevilla prior to the international break, which lead to the following comments.

“I don’t know what will happen now,” Rakitic said via Goal.com. “It’s tough because I want to play and not just be part of the team. I will do everything possible to change my situation.

“I have two years left on my deal and there’s no better place to play than Barcelona, the best club in the world,  but I need to play and not just enjoy walks around the city and the beach.

“I spoke with people at the club, everyone knew I had other options.

“I want to fight so that the team see me ready to deliver on the pitch. I want to thank the fans for the affection they showed me this weekend, but if nothing changes, we will have to sit down and talk about my situation again.”

Goal also state that there’s interest from Serie A duo Juventus and Inter Milan, though United have been linked with a move before, so it appears as though our interest could be reignited.

The Red Devils were said to be keen admirers in the summer but a deal never happened, with Ander Herrera leaving the club without a replacement.

Unpopular Opinion: Ivan Rakitić could walk into every team in the world

It is inexcusable for a club with United’s money to let a starting player like Herrera to leave for free, but add not signing a replacement on top of that…

Everyone knows the people who run Manchester United don’t have their priorities right. It’s all about commercial growth, with on-pitch success shifted into the backseat.

Let’s see what the club comes up with in January.

Rakitic, if he leaves Camp Nou, is likelier to do so next summer.