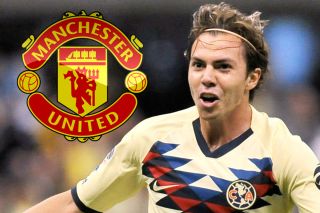 The only Mexican to play for Manchester United is Javier Hernandez.

We’ve got mostly good memories with Little Pea, a hidden gem discovered by Sir Alex Ferguson and his scouting network, but hopefully not the last star to represent United and Mexico.

How I miss the days we’d make signings like that. Not too costly but a great find. In before anyone else gets a sniff of the player’s talent.

But United could be about to sign another Mexican if recent reports are accurate.

His name is Francisco Sebastian Cordova and he’s a 22-year-old midfielder emerging with quite a bit of talent inside his locker.

Cordova has done very well for Club America but it’s time for a move to Europe. And, with three goals in his last seven games for the Mexican club, it might be time for United to send a signal of interest.

He only won his first cap for Mexico last week against Trinidad and Tobago, but now Mexican publication Record report (cited by The Sun) that Sevilla and Benfica, along with United have registered an interest in Cordova and had scouts watch him recently.

Ole Gunnar Solskjaer is trying to build his team with exciting young players and his signings to date have done well.

Cordova is an attacking midfielder, who can also play on the left, and is seen to be one for the future. The Transfermarkt currently values the Mexican starlet at £1.08m.

It’s just a matter of fixing the results now and to do that he must get the team to perform better as a United.

Perhaps be less reliant on the counter attack and rediscover ways of breaking teams down when they sit back.

Solskjaer hasn’t just bought young players since he got the United job. Several Academy prospects have been given a chance in the first-team, like Mason Greenwood and Angel Gomes.

Cordova could be the next exciting player brought to Old Trafford if this materializes. Solskjaer needs a better option at No.10!

We’ll keep our eye on it!