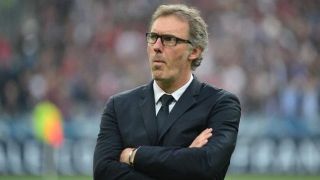 Reports in France claim Laurent Blanc’s representatives have already been contacted by Manchester United over the manager’s position.

Currently occupied by Ole Gunnar Solskjaer, the United job may be available again soon unless the Norwegian boss turns things around, which we very much hope he does after the international break, starting with a win over Liverpool.

Last weekend’s abysmal 1-0 defeat to Newcastle made matters worse as it kept the club on its worst away run since 1989 and left the Red Devils 12th in the Premier League table — just two points above relegation.

A report on Wednesday from The Sun stated that Solskjaer is indeed running out of time. It even suggests a defeat to Norwich at the end of the month will be enough to see him axed by the Glazers.

As expected with an international break, a number of managerial candidates will be put forward.

Like RB Leipzig’s Julian Nagelsmann, earmarked as a strong possibility despite being just 32-years-old, as per the Daily Mail.

Meanwhile, Italian outlet Gazzetta dello Sport (via AS) stated the United job “greatly fascinates” Max Allegri, who is expected to be taking a 12-month sabbatical.

And now RMC Sport as per Sport Witness claim former PSG and Bordeaux boss Blanc is another possibly in line for the hot-seat.

However, the Lyon job could also appeal to Blanc with Sylvinho recently getting the sack.

He has not worked since 2016 and the last time United looked for a manager – last December after sacking José Mourinho – Blanc was one of the managers who reached out to the club, making the Reds aware of his interest in the role.

The report in France claims Blanc is “attentive to Ole Gunnar Solskjaer’s situation,” and thus hinting that he’d like to take the job from his ex-teammate.