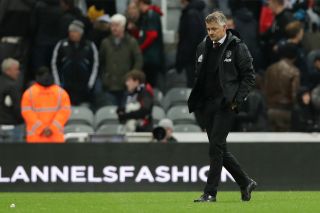 It is Manchester United’s worst ever start to a top division campaign with the team an unpalatable two points clear of the relegation zone. I’ve never been so pleased to have an international break.

It’s October and Ole Gunnar Solskjaer is floundering amidt the wreckage of another rapidly sinking season.

The United boss is looking out of his depth, but all is not lost. He’s sleepwalking his way to the sack but there are still measures he can take to rescue a now desperate situation.

It is becoming increasingly apparent that Solskjaer is nothing more than a Glazer puppet, bending at will to the demands of those above him. Every press conference is filled with positivity, he’s too nice and seems afraid to shy away from toeing the party line.

Like Mourinho, Ole needs to be more forthright and up front about what’s going on. He’d walk out of here a hero, with confirmation that the board have left another United manager up the creek without a paddle. He shouldn’t have allowed Romelu Lukaku to go without a replacement, he should have demanded another central midfielder. Those two decisions alone have left him a dead man walking.

He’s protecting the board and that’s not on. Mourinho shot from the hip, fought his corner and was ultimately sacked for it, but he was toxic towards the players as well. At least he went down fighting. In the dugout too, Solskjaer needs to make his voice heard more. Is it him taking the team, or Michael Carrick? How much of a say do Mike Phelan and Kieron McKenna have? It seems a case of too many cooks. Take control, Ole, get a voice and be strong!

Do what he did to get him the job

One of the strangest things about this mess, the single biggest issue I cannot simply get my head around, is the change in Solskjaer’s raison d’etre. When he came first came in, we played 4-3-3 with one holding midfielder and two box to box midfielders bombing on. We pressed high, moved the ball quickly, and scored goals for fun. It was no co-incidence that Paul Pogba was the star man during the longest managerial honeymoon in history, the string-pulling heartbeat of the team.

Seven months on, and he’s playing as a central defensive midfielder in a midfield two, so deep he’s almost holding hands with the centre backs. Why are we playing a 4-2-3-1 with two CDMs when we’ve got our best defensive unit for years? It makes no sense. Granted, we no longer have the departed Ander Herrera but why not put Andreas Pereira there with Pogba and Scott McTominay.

It’s defensive, rigid and predictable, the goals have dried up and the press is conspicous by its absence. If Solskjaer reverted to the blueprint that got him the job in the first place, it would certainly help his cause.

Show us the vision

That leads us into point three – we need to see what Solskjaer plans to do in the long term. Look at Frank Lampard at Chelsea. He, like Ole, needs time but he’s already got a plan and an identity for his Chelsea side.

It will be an inconsistent season for the Stamford Bridge side, but you can see what the manager is trying to do. An energetic and exuberant side built on youth,  the rookie boss – three months into the job – has implemented a dynamic, front-foot, attacking brand of football. The sort of style that every fan wants to see.

Solskjaer does need time, and this is the mother of all rebuilding jobs, but if he can show us the vision and a future – rather carrying the air of a BTEC PE teacher – we’d all be prepared for patience and move on from the horrible situation we are in. At the moment, it’s impossible to tell how he wants United to play.

Drop the favourites and shift the deadwood

If United are to progress, Ole needs to be ruthless and aggressive. Things certainly started in the right way when he jettisoned Chris Smalling, Alexis Sanchez and Lukaku. But there are too many passengers in the team and at times it’s almost like we play with eight men when Jesse Lingard, Nemanja Matic and Juan Mata are in the team.

Lingard is stealing a living, Matic is pony and as much as I love Mata (who doesn’t?), as a player he is done for. There is no future in persisting with these players. According to TalkSport and several other sources, there are rumours of a new contract for Lingard. Why? Based on what? This is where we are going wrong – by rewarding mediocrity.

We also need to stop Marcus Rashford getting anywhere near a set-piece and take Ashley Young off corner duty. It is madness.

With the possible exception of Mason Greenwood, this crop of youngsters don’t seem ready.

The ideology of throwing in a bunch of kids to save our season akin to the efforts of the Class of 92 is pure fallacy. Angel Gomes and Tahith Chong have shown flashes of promise but are unpromised diamonds and it’s a huge risk to bring them through into the worst United team in living memory. It would do more harm than good.

Ole’s stance to give youth its chance was admirable but, on the face of it, very naive. I believe in all three of them, but it’s just too early. We need to get the ideology out of our heads that they can just come in and revolutionise our fortunes. It needs to be more sporadic.