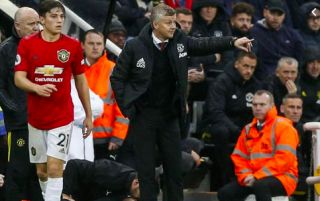 Winger Daniel James has labelled his Manchester United form as ‘all right’ as he prepares for Wales’ Euro 2020 qualifiers against Slovakia and Croatia.

James has established himself as a first-team regular in Ole Gunnar Solskjaer’s side since his arrival from Swansea City this summer, after a rapid start to his United career.

The 21-year-old deservedly won United’s player of the month for August after scoring goals against Chelsea, Crystal Palace and Southampton.

Unfortunately, James has not been able to maintain the brilliant goal-scoring form he arrived at Old Trafford with this summer, with the Reds struggling dramatically in front of goal.

However, James, perhaps unfairly, is now being one of the key players relied upon to deliver the goals for the Reds this season.

“If you’d said to me a year ago that I would now be playing regularly for Manchester United and Wales I’d have said: ‘Don’t be silly,” James told BBC Sport.

James described his current form for the Reds as ‘all right’ and said: “It’s still early. I am thinking: can I go and get more goals or more assists?”

Many fans thought the signing of the Welsh International was a look to the future and he would gradually be fed first-team football by Solskjaer.

However, the injury to Anthony Martial and the failure to sign replacements for the departed Romelu Lukaku and Alexis Sanchez means he is now a first-team starter from the left-flank.

Ryan Giggs’ Wales side currently sit fourth in their Euro 2020 qualifying table and cannot really afford to lose to either Slovakia or Croatia if they are to keep their hopes of qualifying alive.

Daniel James " I didn't think I was going to make it as a footballer" pic.twitter.com/rBPZ3zJcAY