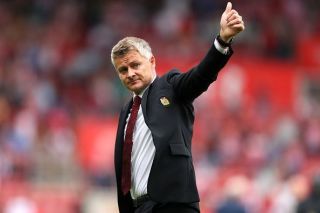 Ole Gunnar Solskjaer will want patience but Manchester United’s vision doesn’t mean they have to stick with him.

That’s the view of Sky Sports’ Adam Bates, or better known as @ghostgoal on Twitter, who takes a look at United’s rebuilding project as well as the likelihood of Solskjaer not lasting much longer in the hot seat.

The Red Devils are having their worst start to the season in 30 years which says enough about the job Solskjaer is doing.

As a club, we’ve overpaid for players over the years and not all of that is Solskjaer’s fault. His three signings from the summer look like good buys.

You can see by those signings — Harry Maguire, Daniel James and Aaron Wan-Bissaka — that Ole is trying to build a core for his team. That won’t happen overnight but he needs results before time runs out.

I don’t feel three decent signings is enough to water down United’s performances and results thus far this season. Transition or not, you need to be winning football matches.

The philosophy United want to set and the objectives set should remain intact even if the manager departs.

If you look at the managers we’ve had since Sir Alex Ferguson retired, the players have had to apply their games to totally different styles. All three of those transitions were very expensive.

I don’t think Solskjaer’s sacking is imminent but you would naive if you thought nobody at United was beginning to consider it. The Glazer family will make a financial decision.

Just take a look at the coaching setup. We’ve got a manager with a dodgy record in the Premier League and zero experience at the top level. Kieran McKenna has never coached a senior side at this level, Michael Carrick is trying his hand at a coaching gig for the first time, and Mike Phelan has gone very quiet lately… especially from the early days under Solskjaer when he became a Twitter sensation, or when he took the credit for the last five years with Fergie.

Something needs to change. Maybe it’s the coaching as it’s difficult to make out what style United come with during 90 minutes of football. They all take responsibility for that, the players too.

We continue to back the manager and players. Everyone should want them to pull through but it looks like it will get worse before it gets better.