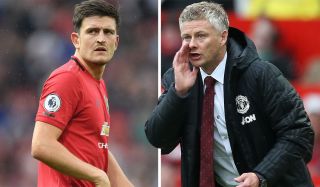 Harry Maguire hits back at critics!

I think it would be unfair to say any of our three new signings have had slow start to life at Old Trafford, though results are going to way we want them and the overall performance of the team is well below par.

Maguire joined Manchester United before the start of the season and initially looked like he could give United that much needed boost in defence.

It was a long time coming for United to sign a top centre-back. José Mourinho wanted one over a year ago, but Ed Woodward unsurprisingly failed to deliver. Ole Gunnar Solskjaer may have got his man but he was made wait… resulting in Maguire missing pre-season training with the Red Devils.

I have every faith in the 26-year-old centre-back and have noted that this is not an easy time for new players coming into the squad.

All players take time to settle and Maguire has every chance of becoming a great leader at Old Trafford.

Maguire has suggested that he was being judged too soon.

“I think it’s the long term, that’s what the main thing is. In five or six years’ time, judge me then — whether I have been a success at this club or not,” the England International was quoted, as per the Daily Mirror.

“And I do believe and am really confident that, in five or six years’ time, I’ll be a success and I am sure we’ll have many, many good times here.

“We need to keep improving as a team, not just me as an individual. I feel, if we improve as a team, I’ll be a success too.”

He’s right saying it doesn’t all come down to one player. And the defence will be better again once we actually sort out the midfield and attack.

Looking back on the club’s business in the summer, it looks like we got rid of midfielders and attackers for defenders. A club like United shouldn’t be operating like that.