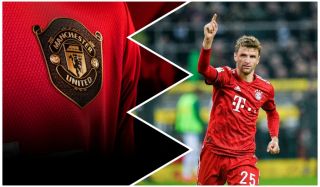 The news that Thomas Müller is seeking permission to leave Bayern Munich in January could appeal to Manchester United.

Selling Romelu Lukaku and allowing Alexis Sanchez to leave on loan was a risk and it has backfired. Marcus Rashford has been unable to fill the void and Anthony Martial has been out injured, therefore, Ole Gunnar Solskjaer has had to call upon 18-year-old Mason Greenwood.

There’s no denying the youngster’s ability, but he’s not ready to lead the line for United yet.

It’s effecting Solskjaer’s reign as manager because his win ratio now is 47.5% — the worst of any United manager since Dave Sexton (via BBC Sport), who was in charge from 1977-81, and most people you will talk to that remember the ex-Chelsea and QPR manager will tell you his football was boring and uninspiring.

And, if you don’t score goals you don’t win football matches.

It has been reported that Müller is becoming disillusioned and upset at his lack of playing time under Bayern boss Niko Kovač. The striker has been played in as a CAM but loanee Phillip Coutinho is currently winning the battle for the 10 position.

The Bavarian native did not start any of Bayern’s last five games.

German publication Bild is now reporting that, according to their sources, Müller wants out of Bayern as soon as possible.

Exklusive: @esmuellert_ wants permission from the Club to leave @FCBayern in winter @SPORTBILD

Although people can see why the Germany international is unhappy, a winter move is seen as an unexpected development.

Bayern fan site Bavarian Football Works reacted to the news today: “Müller’s current problems of being a bench player or being played out of position are oddly reminiscent of his struggles under Carlos Ancelotti. At that time, Müller was also unhappy at his playing time and how he was utilized. In addition to talking about himself having a “possible” future exit, he said then that his “qualities… seem not to be one hundred percent in demand.”

But are his qualities in demand now?

The last time United signed a player from Bayern was 2015 and they knew well Bastian Schweinsteiger was finished at the top level. They wouldn’t sell Müller if they thought he was still a world-class goalscorer and he wouldn’t be wanting to leave his local team which happens to be the biggest club in his homeland.

Moreover, wasn’t this the idea when United signed Radamel Falcao, Romelu Lukaku and Alexis Sanchez? To sign a world-class attacker to bring goals to the side. Two of the three flopped, the other didn’t suit the football style Solskjaer wants to play.

Sadly, the manager’s style isn’t very clear anymore. It looked threatening in the final third when he took over as caretaker manager in December, but now as permanent manager it has gone very stale.

Müller only goal thus far this season came in the Champions League, but he has recorded 4 assists in as many league appearances.

United are also linked with Juventus striker Mario Mandzukic, 33, which appears to be a much easier deal to get done in January. We’ll see how this Müller story develops but his goalscoring record these last few years has been average.

The last time Müller netted 20 goals in the Bundesliga was 2015/16 and he’s not got double figures since then.

Solskjaer, or whoever is in charge next summer, needs to strike gold with an up and comer. A lot of responsibility for a youngster though.