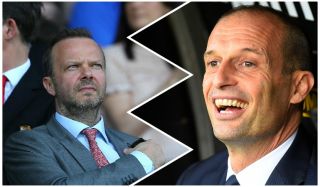 One of the world’s leading football managers is current without a cub and has reportedly set Manchester United a deadline to appoint him as their new boss.

According to Mirror Football, as per Italian outlet Gazzetta dello Sport, Massimiliano Allegri is only willing to take the United job if he’s offered it in the next couple of weeks.

Allegri resigned from his post at Juventus at the end of last season and has since been able to take a break from the game.

That can do a manager the world of good if they can use the time to give their footballing mind a refresh, more spare time to watch other teams and take note of different styles.

Pep Guardiola did it too, for a year after leaving Barcelona and it helped rejuvenate the Man City boss before he took charge at Bayern Munich.

But let’s not forget Ole Gunnar Solskjaer is still in charge. The club has yet to make a decision on his future at Old Trafford, so we really shouldn’t assume that he’s gone.

The Sun claim Solskjaer will be sacked if United lose to Norwich at the end of the month.

Meanwhile, the Daily Mail reveals that RB Leipzig manager Julian Nagelsmann is lined up as a potential manager for the future.

Apparently Allegri is keen on the job — but only on the basis that he’s given the role as early as possible. The Mirror’s report adds that he would be unlikely to accept such a proposal if it was offered to him as late as December.

This is a manager who has won the Serie A title every season he was in charge of Juventus, also leading the ‘Old Lady’ to the Champions League final on two occasions.

It’s certainly food for thought, although we previously ran a piece on why United should avoid appointing Allegri.