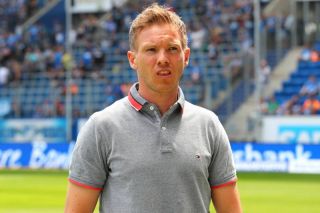 Time for Ole to look over his shoulder.

Manchester United have reportedly been monitoring the work of RB Leipzig boss Julian Nagelsmann with a view to the German coach possibly taking charge in the future.

According to Adrian Kajumba of the Daily Mail, the Red Devils are impressed with the job Nagelsmann is doing at Leipzig and what he achieved previously with Hoffenheim.

The report reads: “While pressure is building on current boss Ole Gunnar Solskjaer now, Sportsmail understands United current have Nagelsmann down as one to watch for further down the line. “But the process of gathering information on him is well under way.”

At the age of 28, Nagelsmann became the youngest person ever to manage in the Bundesliga.

Although his start to life at Leipzig has been good, it was the work at Hoffenheim that drove lots of attention Nagelsmann’s way.

He saved the club from relegation after taking over in 2016, before guiding the club to fourth and third in the Bundesliga in the subsequent seasons. They lost a number of key players during that time but he kept them afloat and winning football matches.

Watch below as TifoFootball take a closer look at the kind of tactics employed by Nagelsmannn during his spell at Hoffenheim:

After seven games this season, Leipzig sit in fifth place and are just two points behind leaders Borussia Monchengladbach. Though even with the highly-rated duo Timo Werner and Marcel Sabitzer in the team, their main issue so far this season is breaking down deep-sitting opponents in front of their own fans:

1/4 – While #RBLeipzig have won all their 5 away games with coach Julian Nagelsmann, they have just won 1 of their 4 home games this season (2-1 vs Frankfurt). Struggle. pic.twitter.com/HBYEFmdaXs

Solskjaer isn’t doing a very good job at United and The Sun claim he could get the sack later this month if the Red Devils lose to Norwich. They sit 12th in the Premier League after eight games.

Meanwhile, the Daily Mail’s Chris Wheeler says Solskjaer is concerned for his job security should United lose heavily to Liverpool in their next outing, whereas The Sun’s report (linked in above paragraph) states that the club are irritatingly writing off that match…

If Solskjaer is sacked in the coming weeks, we can expect Nagelsmann’s name to be in the equation along with former Juventus boss Massimiliano Allegri who has been learning English, according to The Guardian.