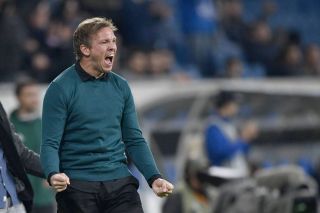 There’s been talk of Julian Nagelsmann being in line for the Manchester United since last night.

Ole Gunnar Solskjaer’s job is reportedly under threat with The Sun claiming he could be sacked before the end of the month should United fail to beat Norwich.

Just 10 months in the job, Solskjaer looks out of his depth and looks set to be leading the team into a relegation scrap. The Red Devils currently sit in 12th — just two points off the drop zone.

READ MORE: ‘I believe I could help them’: Man Utd offered helping hand as Lille director wants to work with a big club

Currently managing RB Leipzig, Nagelsmann built his strong reputation as a rising coach at Hoffenheim. He went from saving them from relegation to qualifying for the Champions League. A remarkable turnaround.

Below are some reactions to the Nagelsmann to United stories, which originated from the Daily Mail:

Would personally love Julian Nagelsmann to take over United. Won’t happen though. Bayern bound in my opinion

My picks in order of preference.

Knowing Utd we will end up with big Sam when we drop into the bottom 3. Thats a joke btw before folk bite my head off 😆

I would really be excited if Julian Nagelsmann was appointed the new united manager.

Just saw an article about an interest in julian nagelsmann, what’s the point when the board is the same, it will be just another short term thing. Get a director of football in first and then select a replacement as they both need to get on, @ManUtd getting it wrong again.