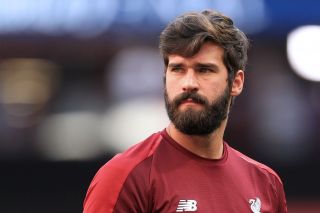 According to ESPN, three Liverpool stars will be doing extra training during the next week in order to kick-start their respective seasons after either dealing with fresh or long-term injuries.

Alisson has been left out by Brazil and there’s a good chance he will start between the sticks at Old Trafford in place of second-choice Adrian.

The Brazilian picked up an injury at the beginning of the season, whereas Oxlade-Chamberlain and Lallana are only back from long-term injuries and haven’t been much use when given game time by Jurgen Klopp.

It remains to be seen if Ox can get back to his best for Liverpool after suffering a nasty injury last season, which ruled him out for most of the campaign. They will have high hopes for the England international.

Of the three, Lallana would be the player I fear least. The former Southampton playmaker’s best days are behind him, but that doesn’t mean he wouldn’t perform against this United side.

The Sun claims United are already writing off the clash against Liverpool. That sends a very sorry message about the current state of our club.

Think back to the years, not that long ago, when United were winning titles and far better than Liverpool. A result was never a given because they’d raise their game for fixture.

Have we really given up?