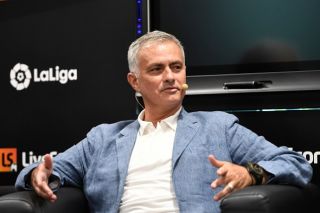 José is edging back into the game.

José Mourinho has been out of work since getting sacked by Manchester United last December.

According to the Daily Mail, Mourinho has considered returning to football and is monitoring Tottenham’s situation, which would make Spurs his third club in the Premier League should they sack Mauricio Pochettino and appoint The Special One.

The last contract Mourinho signed (Manchester United) was due to run until 2020.

Mourinho, 56, is prepared to bide his time and wait for the right job. In the meantime, he has been working predominantly as a TV pundit and joined the Sky Sports football team ahead of the season.

It has been reported in the past that Mourinho has already declined offers from Benfica and Chinese Super League side Guangzhou Evergrande.

Spurs have endured a shocking start to the season and it only casts doubt over the future of Pochettino, who, not long ago was reported to replace Mourinho at United.

The Red Devils will now be asking themselves why they didn’t stick with the initial plan to hire Pochettino, as The Sun claims Ole Gunnar Solskjaer is nearing the sack just 10 months after landing the Old Trafford job.

It’s important to note that the MailOnline piece states that ‘The club have no plans to sack Pochettino’ who would be a pricey acquisition for any club as he’d cost £32m whilst under contract with the London outfit.

After Spurs’ recent defeat to Brighton, he said: “We need to find a way to stay together and be all together again and find a good dynamic.”

It’s going to be long international break but at least United can’t lose next weekend!