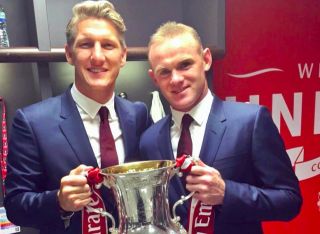 Tributes have been poured in across the footballing world after Bastian Schweinsteiger today announced he is retiring from football at the end of the season.

The 35-year-old is ending his career at MLS outfit Chicago Fire, after spells at Bayern Munich and Manchester United.

Schweinsteiger, a World Cup winner with Germany in 2014, will be most remembered for establishing himself as one of the best midfielders across Europe during his time at Bayern.

The midfielder was a generational talent, and won eight Bundesliga titles during his time in Germany.

Unfortunately, Schweinsteiger’s two-year spell at Manchester United did not turned out as planned.

There was huge excitement among fans when a 31-year-old Schweinsteiger moved to Old Trafford in 2015 under then boss Louis Van Gaal.

But he could not quite replicate the form he showed in Germany but was still loved by United fans who respected him for the passion he showed for the club.

Schweinsteiger was frozen out from the first-team to many fans displeasure when Jose Mourinho arrived at the club, and never found his way back into the side.

During his time at United, Schweinsteiger made friends with club record goalscorer Wayne Rooney.

The pair’s friendship has continued to blossom in the MLS with Schweinsteiger at Chicago Fire and Rooney at DC United.

Congratulations to my good friend @BSchweinsteiger on an unbelievable career. It was a pleasure to get to play alongside you. Good luck in your retirement 👏👏👏 #legend pic.twitter.com/rHOCbOnWBH