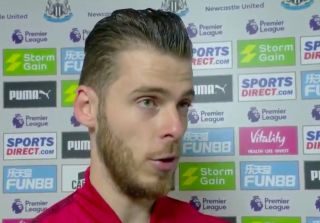 Former midfielder Paul Ince says Manchester United fans would be justified in being ‘disgraced’ by David De Gea’s post-match interview after the defeat to Newcastle.

Sunday’s defeat means Ole Gunnar Solskjaer’s side are just two points off the relegation places eight games into the season.

The Reds have extended their run of failing to win an away game to eleven matches, and have made their worst start to a league campaign in 30 years.

It was yet another unacceptable performance from United, who lacked intensity, imagination and fight against a team firm candidates for relegation.

David De Gea looked despondent in his post-match interview with Sky Sports, visibly demoralised after United failed to score for the second game in a week.

"This is probably the most difficult time since I've been here. I don't know what is happening."@ManUtd goalkeeper David De Gea struggles to hide his deep disappointment after the Reds' 1-0 defeat to Newcastle 😮

De Gea is one of the leaders in United’s team and has worn the captains armband on several occasions in Ashley Young’s absence.

Ince criticised the Spanish international for not delivering a strong message after the game, instead just claiming he did not know what the obvious problems at the club are.

“I watched David de Gea’s post-match interview and I was at a loss,” Ince told Paddy Power.

“He’s meant to be one of the leaders, if that was Peter Schmeichel standing there, there’s no chance you’d have seen that interview.

“This is one of the top players, the leaders at Man United, who has just signed a five-year contract. And he looks like he doesn’t have a clue what’s going on.

“If you’re a United fan listening to your goalkeeper, one of the main leaders in the team, and that’s the interview you hear, you’d be right to be disgraced.

“I’d be looking thinking, ‘Jesus, he doesn’t have a clue what’s going on’ – I bet he’s regretting signing that contract.”