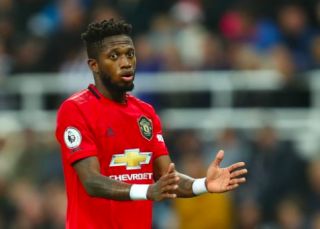 Manchester United midfielder Fred has responded to criticism received in the wake of the disappointing 1-0 defeat to Newcastle on Sunday.

The defeat at St James’ Park leaves Ole Gunnar Solskjaer’s side in twelfth place, just two points above the relegation zone after eight matches have been played.

A 1-0 scoreline to Newcastle was justified by the underwhelming efforts yet again put in by United.

The problem area was mainly the midfield consisting of Fred, Scott McTominay and Juan Mata, who were all below-par in Sunday’s game.

Fred, in particular, warranted some of the criticism he received from large sections of supporters after a poor showing.

The Brazilian midfielder worryingly could not even get the basics right against a Newcastle side that are firm candidates for relegation. He was consistently wasteful in possession and looked flustered and hurried, even when under little pressure from the opposition.

“Some critics are pointless — but many can offer me lessons,” Fred said as quoted by the Sun.

“I like to read what people are saying about my performances. With that, I can try to get better.

“Every day when I arrive at the training ground, when I see those big letters with the name of the club, I pinch myself.

“So I know this club is gigantic. I like to read about its history, best players and historical moments.

“It hasn’t been great times for us — our rivals are winning titles and we’re not even in the Champions League. It makes our fans sad and I feel sad as well.

“This club deserves silverware and we’re going to fight to get better. We have to put United back in the place it should never have left.”

Many United fans had called for Solskjaer to start Fred in midfield after a couple of decent showings from the substitutes bench in recent weeks.

But, if anything, the performance on Sunday has justified Solskjaer’ decision to keep the 26-year-old out of his side for the majority of this season.

The recent abject performances have evidenced the importance of Paul Pogba in providing any kind of fluidity to United’s midfield.

Pogba looks the only Reds midfielder capable of breaking down opposition defences, and Solskjaer will desperately hoping the Frenchman will return from injury for the home game against league leaders Liverpool after the international break.