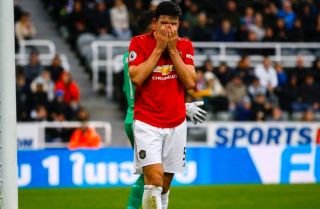 Harry Maguire has told Manchester United fans that ‘we must stick together’ following Sunday’s defeat to Newcastle United at St James’ Park.

The centre-back was one of the better performers for Ole Gunnar Solskjaer’s side, who looked void of any ideas against a team that in reality should have been comfortably swept aside.

Maguire’s partnership with academy graduate Axel Tuanzebe was the only positive to come from the defeat, which extended United’s winless run away from home to a shocking eleven games.

NEXT:Man Utd to demand £25m for on-loan ace in attempt to cut payroll

The pair should start in the home game against leaders Liverpool after the international break, regardless of whether Victor Lindelof recovers from his back injury.

But Maguire was one of the main culprits in the United side for missing the best opportunity of the game against Newcastle.

The England international somehow failed to score from a free header inside the six yard box; if converted the Reds could have led going into half-time and it may have been a completely different story.

However, there are no excuses that can justify United’s abject effort and creating one clear-cut chance from a corner against relegation favourites is totally unacceptable.

Not good enough, gutted. We must stick together #MUFC 🔴❤️ pic.twitter.com/PPm8eYfT6F