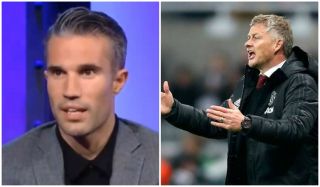 Despite playing for Manchester United, Robin van Persie has no real connection to Ole Gunnar Solskjaer.

So it’s sort of refreshing to read his analysis on the situation because you’ve either got people blowing smoke up Ole’s arse because they were a team-mate of his, or you’ve got the ABU brigade who will take any opportunity they get to knock the United manager.

“It’s my responsibility. I need to sort their heads out,” said the United manager, as per Eurosport.

“Young boys lacking confidence, they need some help from experienced players and staff.”

Van Persie didn’t hold back this thoughts on Sunday when he criticised Solskjaer in the wake of United’s disappointing defeat to Newcastle.

The former striker has even questioned whether Solskjaer knows how to improve the confidence of his players, as United lost their third game in the Premier League this season.

“You can see he’s struggling there, if I’m really honest, during that interview,” Van Persie told Optus Sport, as quoted by the Metro.

“And I get it if you’re manager of Manchester United during this period of time.

“So he’s searching for words, maybe he chose a few wrong ones there.

“If you’re a player you’re a little bit like, ‘my head is fine’.

“Even though you can see the players are low in confidence, he needs to find a way to reconnect again and to get their confidence high.

“As a manager, when you’re team is low in confidence get them up, when your team is too high in confidence, when they are becoming a little bit too much, you have to get them back to the middle again.

“At the moment, based on this interview, and based on what I’ve seen in the game, I’m not sure if he really knows how to find the buttons there.”

The defeat leaves United with just nine points from their opening eight games, the worst record in 30 years, and Solskjaer looks some way off finding a fix as his players continue to misfire in the final third.